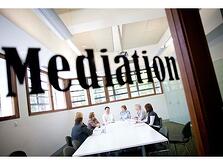 Kenny Leigh & Associates, family and mediation lawyers in Jacksonville, Fleming Island, Daytona, Gainesville, Boca Raton, and Fort Walton Beach, host a wealth of knowledge, experience, and resources for a mediation divorce. However, before beginning the process, we believe it is best for our clients to have some foreknowledge of what the divorce process overall is most likely going to entail. This is particularly true when you are looking to hire mediation services, as this is a specialized section of the divorce process. Since so many divorces are a contentious process, mediation may not seem to be common practice. However, mediation is frequently used in reaching a mutually reasonable conclusion. The following is an overview of the mediation process as it relates to getting a divorce.

An Alternative to Court-Based Divorce

A mediation is a completely different kind of divorce than the more traditional court divorce that most people are more familiar with. If you are considering going through a divorce, you would be wise to consider mediation because of its most important difference from using court to decide how your divorce will be settled.

The most major difference between a court divorce and a mediation divorce is that the court is able to command one party or the other to concede, while in mediation the mediating attorney cannot make anyone do anything. Furthermore, since mediation is not compulsory, there is both a higher likelihood of reaching an amicable arrangement that meets the needs of both sides and one that is not based on rigid legal requirements.

Furthermore, there are other differences between the two types of divorces. Beyond the control that the mediation process provides, there are also the benefits of reducing future conflicts and keeping costs reasonable. In a mediated divorce, you and your spouse can avoid issues that could arise in the future by settling everything directly and in a way you both find reasonable. Additionally, the process of using our mediation lawyers in Jacksonville, Fleming Island, Gainesville, Daytona, Boca Raton, or Fort Walton otherwise tends to be a less expensive proposition than involving the court and a series of hearings.

When Mediation is not Appropriate

While mediation works in a large number of cases, there are naturally going to be times when there is a real chance that mediation simply will not work for you. For example, if there has been any domestic violence in your relationship, it may be advisable to consider avoiding mediation. This can go either way, and it is important to know both your own and your spouse's preferences before getting into mediation.

One reason that some spouses choose the mediation process even if there has been domestic violence in the past is that in the session, there is a leveled playing field to work within. Often, physical abuse skews the power dynamic between the spouses to the point where one spouse feels totally powerless. In a mediation session, physical violence is no longer an option and the level of power between the spouses is equalized.

On the other hand, mediation may not be a viable option because productivity can be halted by the stalling of one of the spouses. For example, if one partner would be highly likely to need to pay spousal or child support but has no wish to do so, she can agree to mediation and then stall. Since there is no court to mandate anything, there is no recourse. For this reason, support issues between the spouses are often best decided early on in court as a means of keeping the process moving.

Mediation is not an overly difficult process, and you can often make this aspect of your divorce into a smooth process simply by keeping an open mind. Granted, your spouse must also be willing to show up and be ready to communicate reasonably. In most cases, the mediation process encourages open communication because it is designed to let both sides state and fairly request what they want.

Regardless of whether you and your spouse have had amicable communication in the past, the mediation process allows an open forum. Provided that both you and she are open to settling in a fair manner and commit to the process, the end result should be mutually satisfactory.